Caillou combines the techniques of Granular Synthesis and a Resynthesis Engine giving you a powerful sound generation tool. 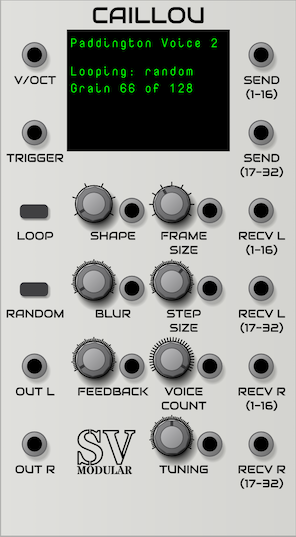 Resynthesis is the process of breaking an audio signal into its base frequencies and synthesizing waveforms to play at these frequencies. When multiple voices are combined, a mostly-accurate version of the audio signal can be created.

The accuracy of the resulting audio signal resynthesis depends a few main variables.

The Frame Size adjusts how much of the audio signal is used to determine the frequencies and volumes that in turn generate the resynthesized signal. A small Frame Size is less accurate for determining exact frequencies to generate, as the frequency bands are larger:

Sine waves are the fundamental building block of the sounds we hear, but we also have the ability to use other wave shapes to recreate these sounds. Each wave shape provides a unique aspect to add to the overall sound, ranging from smooth to a very rough response.

Granular Resynthesis takes the best parts of both Granular Synthesis and Resynthesis, and throws them together into an engine that provides aspects of both.

Tuning provides the ability alter the frequencies of all voices simultaneously, without altering any other aspects of the synthesis. This allows for a fine control of the pitch of the audio signal.

The Step Size controls the playback speed of the Granular Synthesis, and thus the amount of time that it takes to step through a Frame. Step Size can be positive or negative, giving the option to run in reverse as well as forward.

Sonic Fingerprints are the distillation of an audio signal: encompassing multiple Spectral Grains across multiple Frame Rates. These provide a basis for Granular Resynthesis, a selection of frequencies and amplitudes to build new sounds and textures.